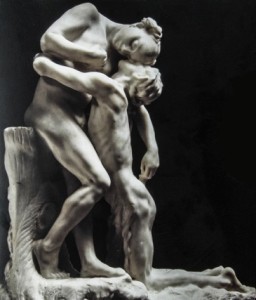 A Song Cycle for mezzo-soprano and string quartet based on the life and work of the French sculptor, Camille Claudel.

Camille Claudel: Into the Fire

. . . Camille Claudel: Into the Fire . . . six songs each of which depict a different one of Camille Claudel's moods in the insane asylum and in the last song she is visited by her friend Jessie Lipscomb with whom she shared a studio many years earlier. All this is poignant and touching stuff, with three of the songs depicting the way Camille Claudel's mind wanders.Robert Hugill

The climactic finale involved the local premiere of Jake Heggie’s Camille Claudel: Into the Fire (2011), an extensive ode to the agonised sculptor — Rodin’s lover — who died in 1943. Ever popular, obviously facile and increasingly daring, Heggie dealt sensitively with the introspective sentiments at hand. He juggled acerbic lyricism craftily with oppressive drama, adorning Gene Scheer’s text with florid wails and eerie melismas at jolting intervals. In the process, he made the primitive lamentations propulsive, the otherworldly illusions, delusions and allusions gripping. DiDonato sang the expansive solos with rare conviction and lustrous, subtly shaded tone.The Financial Times

The life of the French sculptor Camille Claudel is a tangle of art, passion, madness and betrayal. A student and lover of Rodin’s, Claudel was a critically acclaimed artist when she began to show signs of mental distress, which led her family to commit her to an institution, where she spent the remaining 30 years of her life. On Thursday at Zankel Hall, the incandescent mezzo-soprano Joyce DiDonato presented the New York premiere of Jake Heggie’s “Camille Claudel: Into the Fire.” Set for voice and string quartet, the work compresses a tragic life of operatic dimensions into a song cycle of great beauty and emotional resonance.The New York Times

Also performed by Joyce DiDonato and the Brentano String Quartet during the 2015 season at Carnegie Hall and the Barbican in London.

In addition, the work was orchestrated for Sasha Cooke and the Berkeley Symphony.  First Performance: February 26, 2015.