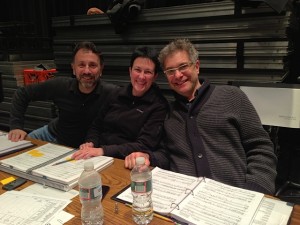 Santa Fe, NM.  General Director Charles MacKay today announced that The Santa Fe Opera will present three new operas, one each season beginning 2013.  His announcement, which comes at a time of economic hardship and retrenchment throughout the arts community, reaffirms The Santa Fe Opera’s 55-year tradition of leadership in presenting new operas and its ongoing commitment to the future of an indispensable art form.  Two of the composers are women who represent the best of their generations, American Jennifer Higdon and Briton Judith Weir.

The first commission, Oscar, based on the life of Oscar Wilde, is by Theodore Morrison, Professor of Music Emeritus at the University of Michigan.  It will have its world premiere in 2013. The second is by the 2010 Pulitzer Prize winner in music, Jennifer Higdon.  She will write an opera based on the bestselling novel, Cold Mountain, by Charles Frazier, for 2015.  Both are first operas for the composers.

The third new work will be the American premiere of Miss Fortune by Judith Weir.  The opera was commissioned and given its first performances earlier this month at the Bregenz Festival and will travel to Covent Garden.  The Santa Fe production will be a new one and is slated for the 2014 season.  Weir’s prolific career encompasses music for voice, film, and orchestra, as well as five operas.  Two of Weir’s earlier operas, A Night at the Chinese Opera in 1989 and Blond Eckbert in 1994, were given their American premieres at The Santa Fe Opera.  Stars, Night, Music, her newest work for orchestra, organ and chorus, opened the 2011 First Night of the BBC Proms.  Weir was recipient of the Queen’s Medal for Music in 2007.

“The Santa Fe Opera has an enviable record of presenting new works to the public,” said MacKay.  “In the Company’s very first year it presented the world premiere of Marvin David Levy’s The Tower, followed the second year by its first commission, Carlisle Floyd’s Wuthering Heights.  In total, the Company has done 9 commissions, 3 world premieres, and 44 American premieres, including operas by Richard Strauss, Alban Berg, Paul Hindemith, Leoš Janáček, Kaija Saariaho and Thomas Adès.  It was the mission of founder John Crosby that the public be given opportunities to hear operatic repertory that might not be available anywhere else.”   These are the first new operas to be commissioned under MacKay’s leadership.  He became General Director in 2008.

Oscar and Cold Mountain are co-commissions and co-productions with Opera Company of Philadelphia as part of its American Repertoire Program.  It is hoped that this partnership can become a model for opera companies, making it more economical to bring new operas to the public.

“The Santa Fe Opera is fortunate to have a dynamic partner, the Opera Company of Philadelphia, in the creation of Oscarand Cold Mountain,” said MacKay.  “The pairing of a summer opera festival and an urban opera company offers an opportunity for both of us.  I am pleased that this new collaboration has come about, and am looking forward to great things.”

“In difficult economic times, perhaps more than ever, it is important to reaffirm the importance of growth in our sector, and to give our audience exciting and engaging new experiences,” shared David Devan, General Director of the Opera Company of Philadelphia.  “The opportunity to join with the esteemed Santa Fe Opera in realizing these goals ensures that a wide range of audiences in two distinctly different regions of the country will have the chance to experience the operas, hopefully as the first of many cities to produce them.”

Estimates for commissioning and co-production costs, which include the commission fees, preparation of the score, construction of scenery and costumes for each opera are $1.5 to $1.8 million. They will be shared between the two companies on a 60/40% basis with The Santa Fe Opera serving as the lead partner and fiscal agent.  The commissions will be supported by the Wyncote Foundation of Philadelphia, The Santa Fe Opera’s General Director’s Premiere Fund, established in honor of former General Director Richard Gaddes, and gifts from individuals and other private foundations.

Although Theodore Morrison began composing relatively late, he has won considerable acclaim.  He is a respected composer of vocal works, numerous pieces for chamber ensembles and orchestras which have been performed world-wide.   He is founder of the Baltimore Choral Arts Society which he led for sixteen seasons, becoming one of the most successful in the country.  Among his orchestral works is a five movement symphony, War and Reconciliation, based on Civil War poems by Walt Whitman, for full orchestra, soloists and chorus.

Famed stage director John Cox has been Morrison’s collaborator in the development of Oscar.  He is the librettist and will be co-director of the production with Kevin Newbury.  Cox has directed six productions for Santa Fe, the last one beingArabella in 1997.  He began his professional career at Glyndebourne in 1959 and served as its Director of Productions throughout the 70s.  During his long career he has been associated with virtually every important opera company in the world, as well as directing stage and television productions.

The role of Oscar Wilde will be sung by countertenor David Daniels, for whom the opera was written.  Morrison and Daniels have collaborated before, in a song cycle entitled Chamber Music, based on poems by James Joyce which was performed by Daniels and Martin Katz throughout the U.S and in England.  There has been no opera written about Oscar Wilde and while there are many baroque operas written for countertenor, there are few contemporary works.  Daniels is currently singing the role of Roberto in Vivaldi’s Griselda in Santa Fe.

Wilde’s last work, the poem The Ballad of Reading Gaol, describes his ordeal and the savagery of the prison system he endured.  It was a source for the libretto, as were conversations, letters and documents spoken or written by his contemporaries.  Characters in the opera include Wilde’s friend and supporter Ada Leverson (to be sung by Heidi Stober), Walt Whitman (to be sung by Dwayne Croft), and Frank Harris (sung by William Burden).  Wilde’s lover, Lord Alfred (Bosie) Douglas, will be portrayed by a non-singing dancer.

2015 marks the 150th anniversary of the end of the Civil War.  Cold Mountain is Charles Frazier’s powerful account of one soldier, W. P. Inman, who deserts the Confederate army as the war is coming to an end and makes his way back to his home on Cold Mountain.  The novel won the 1997 National Book Award and was made into a film in 2003. The film was nominated for seven Academy Awards.

The Civil War has a special resonance for New Mexicans.  The New Mexico Territory was the site of one of the final and westernmost battles of the Civil War, fought at nearby Glorieta Pass in 1862.  Historians have called it a major event in the history of the Civil War.  The village of Pecos is the site of an annual reenactment of the skirmish.

Cold Mountain composer Jennifer Higdon is one of the most in-demand composers today.   She was awarded the 2010 Pulitzer Prize in Music for her Violin Concerto and a Grammy the same year for her Percussion Concerto.  blue cathedral, written in 2000, on the death of her brother, has become one of the most performed modern orchestral  works.  Her compositions have been performed by leading orchestras throughout the country and she has received commissions from numerous instrumental ensembles.

The versatile American librettist and composer Gene Scheer is the librettist.  Among his many projects are several with composer Jake Heggie, the latest being Moby Dick for the Dallas Opera which was premiered in 2010.  He collaborated with Tobias Picker on two operas, An American Tragedy, premiered at the Metropolitan Opera, and Therese Raquin for the Dallas Opera.  He has written songs for singers including Renée Fleming, Sylvia McNair and Stephanie Blythe, and a song cycle, Voices from World War II for Nathan Gunn.

Nathan Gunn, who will sing the role of W.P. Inman, is one of the country’s leading operatic baritones.  He has performed in virtually every major opera house in the world and is admired as an interpreter of new works including operas by Tobias Picker, Daron Hagen, Andre Previn and Peter Eötvös.  He collaborated with Gene Scheer on the opera An American Tragedy, and the song cycle Voices from World War II.  Gunn is also a distinguished concert performer and recitalist.  He appeared in the 1998 production of Berlioz’ Beatrice and Benedict and the following year in Strauss’ Ariadne auf Naxos in Santa Fe.  He is currently Professor of Voice at the University of Illinois at Champaign-Urbana.

Miss Fortune is based on a Sicilian folk tale called Sfortuna.  Composer Judith Weir, who often makes use of folk idioms, is her own librettist.  She has updated the story to the 21st century making it a topical morality tale about the ups and downs of life and the inconsistencies of fate.  The opera is enlivened by a group of acrobats called “Fates Gang.”

CLICK HERE FOR PHOTOS RELATING TO THESE NEW WORKS