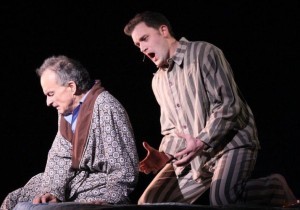 Read more about this work at MusicOfRemembrance.org

For a Look or a Touch

For a Look or a Touch is unabashedly theatrical. Its sentimentality is shot through with lyrical depictions of brutality and terror. A dance-hall swing recalls the happy energy of Berlin before the persecutions began. The Story of Joe tells of a quiet boy savaged by guard dogs. The Singing Forest recalls a horrific torture, with the gentleness of Heggie’s melody contrasting the brutality of the scene.Chris Shull, Fort Worth Star Telegram

Heggie’s song cycle with actors, For a Look or a Touch, is a masterpiece. The music is tonal and evocative… This is an impressive piece of work. It tells the tale musically and vocally without waver or waffle, and deserves many hearings.Philippa Kiraly, Seattle Post-Intelligencer

For a Look or a Touch is based on the diary by 19-year old Manfred Lewin, written for his lover Gad Beck. Lewin, like many gays, died in the Holocaust, but Beck is still alive today. Their story inspired Heggie and his lyricist, Gene Scheer, and the result is a sharply poignant, deeply affecting work for baritone and actor. Morgan Smith and Julian Patrick take the breath away as Lewin and Beck in deeply moving music and lyrics that pull no punches. They’re supported by a first-rate ensemble…Melinda Bargreen, The Seattle Times